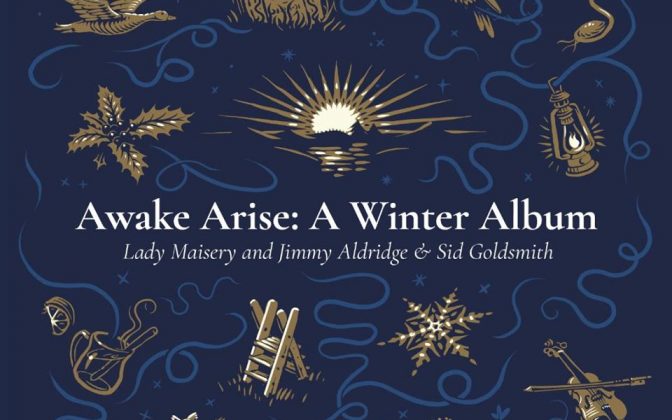 In an unmissable festive collaboration, two of the English folk scene’s most inventive acts (trio Lady Maisery and duo Jimmy Aldridge & Sid Goldsmith) announce a brand new album, 2 Single releases and 8 special launch concerts. ‘Awake Arise’ celebrates the riches of varied winter traditions from the British Isles and further afield and reflects on the hope and resilience in folk song that can bring us closer together through the darkest season.

Award-winning folk trio Lady Maisery (Hannah James, Rowan Rheingans and Hazel Askew) have for nearly a decade produced “some of the most exquisite, thrilling vocal harmony work in the English folk scene” ( The Guardian ). Whether unearthing a feminist twist hidden in a traditional tale, delivering a poignant anti-war ballad, or showcasing their immense multi instrumental talents in original compositions that draw on a myriad of musical influences, Lady Maisery are skilful explorers of the power, beauty and vitality of song.

The beguiling musical partnership of Jimmy Aldridge and Sid Goldsmith complete the powerful line-up of the Awake Arise super-group, bringing the outstanding vocals, sensitive instrumentation and powerful social conscience that has won them widespread critical acclaim.

“Making common cause between antique songs and present circumstances is one of the grails of modern folk, one this young duo pull off impressively… rousing stuff.” ( The Observer).

A companion to the live show, their debut album release as a five piece ‘Awake Arise: A Winter Album’, is out on December 6th 2019 (Many A Thousand Records).   Featuring traditional songs, folk carols, spoken word and newly written music to galvanise and brighten this darkest season, Awake Arise is a warm gift to the wintertime from five of the most engaging and celebrated performers on the English folk scene. True to the reputations of both acts as out-spoken voices on the folk scene, this collection is also a rallying cry to embrace the power of collective endeavour as a vital support during times of hardship and loneliness. In this most uncertain of winters, Awake Arise is more than just a great night out; these are essential songs which remind us who we are and why we matter to each other.