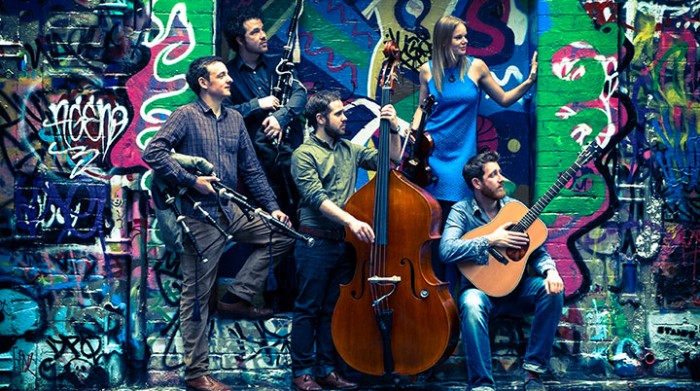 If I were Scotland, I would be very proud of Breabach (it’s all right – I know they are!). ‘Astar’ (the the Scottish Gaelic for ‘journey’ or ‘distance’) is their fifth album. As its title indicates, the album is inspired by the band’s last five years of traversing the globe, touring Australia, New Zealand, Asia, North America, Scandinavia and the Middle East, taking melodic, rhythmic or harmonic ideas from each of the countries they have visited.

Each exquisite track on the album is inspired by people they have met, experiences they have encountered or places they have seen. All the while, the band stay impeccably true to their Scottish roots, including work by Burns, Dick Gaughan and Duncan MacLeod. As if this feast of both original work and tradition was not enough, however, the album explodes even further into the stratosphere of excellence with incredible guest musicians from their travels; on ‘Muriwai’, Maori tradition bearer Scott Morrison provides haka lyrics; on ‘Farsund’, Norwegian Olav Luksengard Mjelva of Nordic Fiddlers Bloc contributes hardanger fiddle; on ‘The White Sands of Jervis Bay’ Aborigine artist Yirrmal Marika sings a ceremonial song from Northern Australia and on ‘Les Pieds Joyeux’, Olivier Demers of Quebecois band ‘Le Vent du Nord’ brings fiddle and foot tapping into the mix.

‘Astar’ is a beautiful example of transcontinental musical collaboration at its best. On the album sleeve notes, the band write ‘One of the most crucial things we have learned through our travels is that there is far more that unites us than divides us’. This album is an exciting, harmonious testament to the truth of this statement. Scotland aside, I am proud of Breabach.