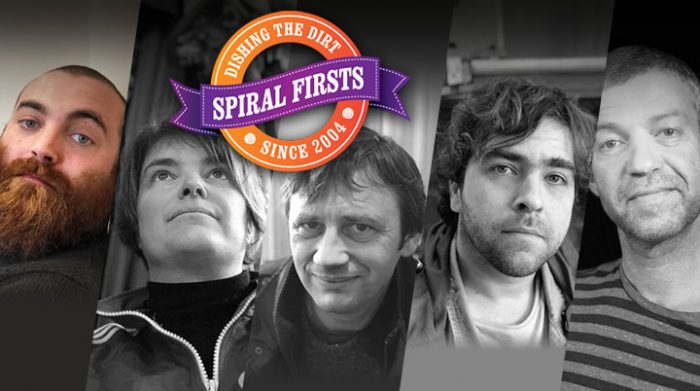 Bagpipes eh? I’ve been scared of the things since I sat too near an odious man who played the highland bagpipes indoors. The fact that he had a beard that started at his eyes didn’t help, and the maniacal glint in those eyes has stayed with me ever since. I filed the bagpipe under ‘weapon of war’ and left it at that. Then it was Andy Letcher of Telling The Bees that gently disabused me of my prejudice, I discovered the delights of fantastic pipers such as Eoin Dillon. BUT I still run like hell when I see anyone brandishing highland pipes indoors, I mean they are fine when played up a mountain, and heard preferably from another mountain.

So here are Julien’s Firsts, his father played the the French bagpipes and he started when he was nine, his style has been heavily influenced by the Uilleann Pipes. He only uses cane reeds (none of that plastic tat thank you very much), and regards the bagpipes as the ‘most poetic of instruments’. In case you think me wonderfully well informed I have to admit that I nicked all of that for Mr Letcher’s interview with Julien for the Bagpipe Society…

FIRST RECORD YOU EVER BOUGHT
“in utero” by Nirvana

FIRST PERSON WHO MADE YOU WANT TO BE A MUSICIAN
I saw my father starting the french bagpipes from morvan when I was 5 years old. I saw his passion and improving himself on that instrument, then I decided to start music with the guitar first and then the bagpipes

FIRST PERSON YOU FELL IN LOVE WITH
Tantelle, I was 10 and she was better than me at football

FIRST THING YOU THINK ABOUT IN THE MORNING
How can I make the person next to me laugh  (girlfriend at home, and friends on tour)

FIRST PERSON YOU’D INVITE TO A PARTY
Raphael Aussenac, Jean Thierry and Leo Garnier (together we rise the average IQ for a person)

FIRST THING YOU’LL ABOLISH WHEN YOU RULE THE WORLD
Morning

FIRST INSTRUMENT YOU EVER OWNED
A tiny guitar

FIRST TRACK ON YOUR IMAGINARY ALBUM OF YOUR OWN GREATEST HITS
La Pause by Topette!!