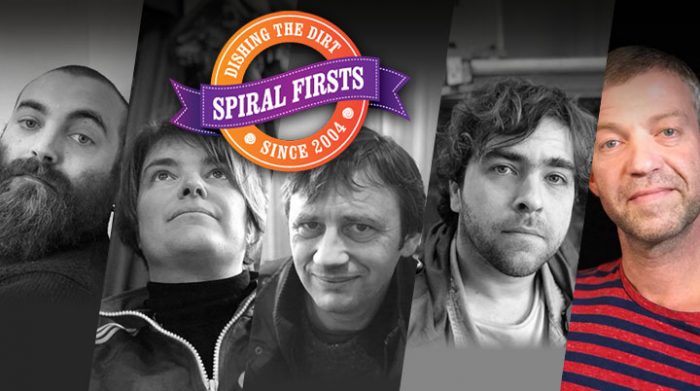 My personal challenge when writing these intro’s is to see how sarcastic I can get before I topple off a moral cliff and can’t get my (admittedly paper-thin) reputation back. So as you can imagine, I was rubbing my hands together with anticipation for Barnaby. With Bass player jokes running a close second to ones about drummers this should’ve been an easy one to rattle off.
However… Barnaby, the lovely bass wielding git, has scuppered me with one answer. He’d invite Xenia Rubinos to his all-star band, I’d not heard of her before this, so I went on Apple music to check her out (for Christ’s sake don’t tell Andy Cutting after his comments about Spotify, more than likely he’ll turn up on my doorstep and administer a swift kick to my editorial balls). Xenia Rubinos is absolutely amazing and I’ve been listening to everything she has done. So thanks Barnaby, you’ve neutered my sarcasm.
Here are his firsts, with a few last-minute and half-hearted sarcy comments from me thrown in…
FIRST RECORD YOU EVER BOUGHT
“Lipstick / Promises” double A side single by Buzzcocks.
FIRST PERSON WHO MADE YOU WANT TO BE A MUSICIAN
I grew up around folk music, as my parents played, sang and dragged my sister and I around festivals. However, it wasn’t until I became obsessed with 2-Tone ska bands, aged 11 that I picked up a bass guitar and started playing along to my records. My heroes were Terry Hall of the Specials, Pauline Black from the Selecter and Ranking Roger and Dave Wakeling from The Beat.
FIRST GIG YOU EVER SAW
Culture Club at Cheltenham leisure centre, although I don’t remember much about that. The first one I really remember was The Beat at Chippenham Golddiggers for my 11th birthday, in 1981.
FIRST PERSON YOU FELL IN LOVE WITH
My first girlfriend, Tessa, although I had a poster of Debbie Harry on my bedroom ceiling, who occupied a lot of my dreams!
FIRST THING YOU THINK ABOUT IN THE MORNING
Coffee!
FIRST PERSON YOU’D INVITE TO A PARTY
Can I invite Deerhoof? The whole band?
FIRST THING YOU’LL BUY WHEN YOU MAKE YOUR FIRST MILLION
A spit & sawdust roadhouse / bar / venue.
(with Deerhoof as the resident band no doubt. Ed)
FIRST THING YOU’LL ABOLISH WHEN YOU RULE THE WORLD
Money.
(you do realise Deerhoof will want paying in your roadhouse? Ed)
FIRST ALBUM YOU’D SAVE IF YOUR HOUSE WENT UP IN FLAMES
Clear Spot by Captain Beefheart.
FIRST PERSON YOU’D SEND ON A ONE-WAY TICKET TO THE HEART OF THE SUN
Oh, so many to choose from, but Rupert Murdoch is high on the list.
FIRST THING YOU EVER PERFORMED IN PUBLIC
My friend Tristan Glover and I started our first band when I was 13. We played a mixture of classic reggae and English Morris tunes, well before E2 existed!
FIRST SONG YOU’D HAVE PLAYED AT YOUR FUNERAL
Sex & Drugs & Rock ’n’ Roll!
FIRST INSTRUMENT YOU EVER OWNED
Other than the primary school plastic recorder, my first bass guitar was a Kay, from the catalogue!
FIRST PERSON YOU’D RAISE FROM THE DEAD
Hmm… That’s a tough one. Probably my lovely friend Jasper King, of Chipolatas fame. His loss is still very raw, for everyone who knew him.
FIRST PLACE YOU’D VISIT IN A TIME MACHINE
A Captain Beefheart gig, I reckon.
FIRST TRACK ON YOUR APPLE MUSIC OR SPOTIFY MOST PLAYED LIST
Balderrama by Mercedes Sosa.
FIRST TRACK ON YOUR IMAGINARY ALBUM OF YOUR OWN GREATEST HITS
Meatballs, Whisky and Beer by Topette!!
FIRST PERSON YOU’D ASK TO JOIN YOUR ALL-STAR BAND
Xenia Rubinos.
FIRST THING YOU’D LIKE TO CHANGE ABOUT YOURSELF
I wish I could do effortless, charming smalltalk, instead of feeling shy and awkward with strangers.
(Get out of the rhythm section mate, you’ve been hanging out with drummers too long. Ed.)
FIRST ARTIST YOU’D BOOK TO APPEAR AT YOUR OWN UNLIMITED BUDGET FESTIVAL
Deerhoof. You can’t go wrong with Deerhoof!
www.topette.co.uk