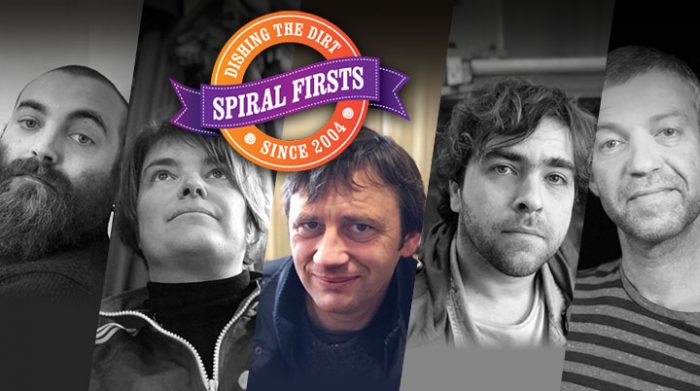 Andy Cutting is one of those truly great musicians who is content for his music to speak for itself. Quietly spoken and deeply modest he is a pleasure to talk to, not least for his depth of knowledge of the history, tunes and personalities within the English Folk Tradition. This modesty is part of his brilliance and, I’m sad to say, his true power. I have uncovered compelling evidence that Andy Cutting has actually been the prime mover behind the whole English Folk scene for the last three decades.

He stands in the wings silently controlling and directing the whole diabolical game like a puppet master. Think about it, he instigated the very concept of the ‘bloke on an accordion and another on a fiddle duo’ with his partnership with Chris Wood. Boden and Spiers tried to wrest their crown but were but a pale imitation of the Cutting-Wood marriage. In fact, we have it on good authority that Chris Wood could neither play nor sing a note when he met Andy. Yet after a mysterious weekend in the woods with Mr Cutting he emerged as the silky voiced crooner we know today. Don’t mention it to Chris though, you’ll get neither of them to open up about the events of those two days, you might however notice a tear and hear Wood’s oft-stated remorse ‘I had no idea how lucky I was to work with him until long after we had gone our separate ways’. Suffice to say, Andy Cutting has a powerful folk mojo running through his veins.

Here then are Andy’s firsts, in which a triangle, Ozzy Osbourne and Chas Hodges feature…

FIRST RECORD YOU EVER BOUGHT
From The Tea Rooms of Mars To the Hell Holes of Uranus. Landscape.

FIRST PERSON WHO MADE YOU WANT TO BE A MUSICIAN
I didn’t ever really wish to be a musician but if is was anyone it was my friend Pete Thompson. He plays the box but also tuba and sousaphone in trad jazz bands.

FIRST GIG YOU EVER SAW
The first gig I paid to go to was Ozzy Osbourne at Hammersmith Odeon on the Bark at the Moon tour.

FIRST PERSON YOU FELL IN LOVE WITH
Tania, I was at school with her. I was 7.

FIRST THING YOU THINK ABOUT IN THE MORNING
Sleep.

FIRST THING YOU’LL ABOLISH WHEN YOU RULE THE WORLD
Religion.

FIRST ALBUM YOU’D SAVE IF YOUR HOUSE WENT UP IN FLAMES
Oranges and Lemons by XTC.

FIRST PERSON YOU’D SEND ON A ONE-WAY TICKET TO THE HEART OF THE SUN
Too many to choose from but today the honour goes to Jacob Rees Mogg.

FIRST THING YOU EVER PERFORMED IN PUBLIC
I played snare drum to my elder brother playing the violin.

FIRST INSTRUMENT YOU EVER OWNED
Premier Jazz drum kit. Ooo actually I had a triangle before that.

FIRST PERSON YOU’D RAISE FROM THE DEAD
I agree with Barn. Jasper King. First tune he ever learn to play was one of mine so thats okay.

FIRST PLACE YOU’D VISIT IN A TIME MACHINE
XTC in 1981.

FIRST TRACK ON YOUR APPLE MUSIC OR SPOTIFY MOST PLAYED LIST
Spotify is a nasty thing. It’s last consideration is the creators of the music.

FIRST THING YOU’D LIKE TO CHANGE ABOUT YOURSELF
My nose.

FIRST ARTIST YOU’D BOOK TO APPEAR AT YOUR OWN UNLIMITED BUDGET FESTIVAL
XTC.