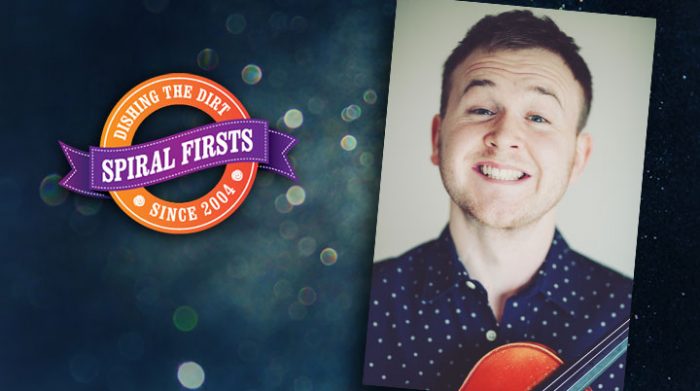 Just look at that mugshot above. We obtained it from the Police in Tunbridge Wells after Mr Sweeney (the accused), had been detained after complaints from local residents. The full story seems a bit murky but details are emerging of a bout of random and uncalled for fiddling on residents doorsteps. Sam was reportedly babbling about ‘spreading the true gospel of folk’ and ‘it’s the music of the people!’. Our investigations have concluded that he had been led astray and, some are saying, unfortunately radicalised by a certain Mr Jon Boden.

Luckily, in the happier days before this fall from grace Sam kindly supplied us with his firsts…

FIRST RECORD YOU EVER BOUGHT
First single was ‘Believe’ by Cher! I went halves with my Dad on the single in HMV in Nottingham! First album was ‘Fresh!’ by Gina G. I bought it in a record shop in Hong Kong on a family holiday when I was seven…

FIRST GIG YOU EVER SAW
Blimey… can’t remember. Embarrassed to say it was probably Fairport Convention!

FIRST PERSON YOU FELL IN LOVE WITH
My current girlfriend 🙂
(nice tactical answer there. Ed.)

FIRST THING YOU THINK ABOUT IN THE MORNING
My inbox and to do list. Think musicians actually play music at home? Think again…

FIRST PERSON YOU’D INVITE TO A PARTY
I don’t really like parties, but I have a lot of fun when I hang out with Sam Partridge, so probably him. Or Saul Rose. Bellowhead and The Wayward Band used to have a lot of fun, so stick me on a tour bus with any of those people again and I’d be delighted.

FIRST THING YOU’LL BUY WHEN YOU MAKE YOUR FIRST MILLION
A lovely converted barn with wonderful acoustics, lots of bedrooms, lots of space to grow vegetables, a communal kitchen and a log burner so I can run a fiddle school for aspiring string players and my girlfriend can grow all the food she wants. That’s the dream.

FIRST THING YOU’LL ABOLISH WHEN YOU RULE THE WORLD
Flying for pleasure.

FIRST ALBUM YOU’D SAVE IF YOUR HOUSE WENT UP IN FLAMES
Probably ‘Lightbox’ by Spiro.

FIRST THING YOU EVER PERFORMED IN PUBLIC
The King Of The Fairies & Drowsy Maggie – a floor spot at Carlton Folk Club when I was about ten years old.

FIRST SONG YOU’D HAVE PLAYED AT YOUR FUNERAL
‘We Will Be Absorbed’ by Spiro. It is the most heavenly, other worldly piece of of music and it’s definitely the sound I’d like to leave this world to.

FIRST INSTRUMENT YOU EVER OWNED
I rented fiddles for a long time, so I think it was probably a red snare drum I got for Christmas when I was little. If I had my time again, I’d be a drummer.

FIRST PERSON YOU’D RAISE FROM THE DEAD
Hmmm… not really into the idea of bringing anyone back from the dead.
(well not in a game of Thrones ‘army of the dead’ way obviously, more in a glowing fairytale style. Ed)

FIRST PLACE YOU’D VISIT IN A TIME MACHINE
I’d probably go back and visit myself as a fifteen year old and tell myself to chill out and worry less.

FIRST TRACK ON YOUR APPLE MUSIC OR SPOTIFY MOST PLAYED LIST
‘You’re The Voice’ by John Farnham. 600+ listens and counting!

FIRST TRACK ON YOUR IMAGINARY ALBUM OF YOUR OWN GREATEST HITS
‘St Patrick’s Day – Young May Moon’ from The Unfinished Violin. It’s my favourite things I’ve ever made.

FIRST THING YOU’D LIKE TO CHANGE ABOUT YOURSELF
My incredibly short hamstrings, which cause me no end of back pain.