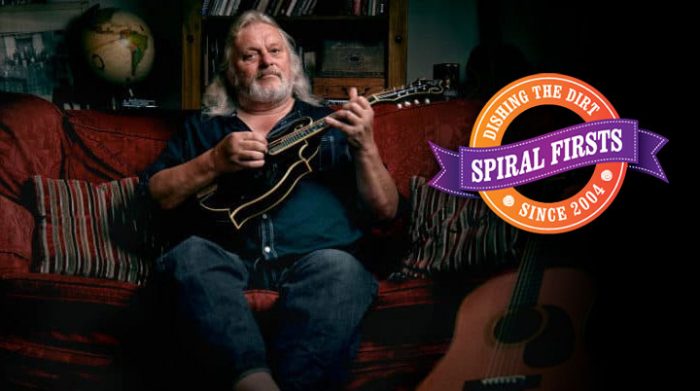 Is Phil Beer the nicest man in Folk music? Very possibly, I’ve never seen him glum or miserable, even when he’d just had a stent fitted he still chatted amiably away (he was horizontal on a garden reclining chair at the time, for all I know he was paralysed and couldn’t get away). All of which explains his long time collaboration with Steve Knightley in Show of Hands, together they are basically the Morecambe and Wise of roots music. Every straight man needs a comedian, and Beer shows the universal truths that can be gained through happiness.

There, let’s see how quickly Steve Knightley’s lawyer tracks me down…

So here are his firsts, interesting stuff, although his time machine destination sounds a bit wonky…

FIRST RECORD YOU EVER BOUGHT
We Gotta get out of this place. The Animals.

FIRST PERSON WHO MADE YOU WANT TO BE A MUSICIAN
Probably my father. He was a good amateur and played in local dance bands. The Exe Vale Hospital Orchestra and also ‘Arthur Challice and his Black Diamonds’.

FIRST GIG YOU EVER SAW
Would have probably been a church gig of some description, or a brass band/male voice choir combo at Princess Pavilion Falmouth. First actual concert outside of church or school would have been… Wait for it… The Joystrings at the Sally army temple in Exeter. Rock ‘n Roll Central!

FIRST THING YOU THINK ABOUT IN THE MORNING
Where am I and who are all these people?
(That sentence conjures up so many unsavoury images.. Ed)

FIRST PERSON YOU’D INVITE TO A PARTY
Always thought that Peter Ustinov would be good value but, sadly..
(What, because he’s dead? That’s not an issue here. Or because he’d say no to your invite? Anyway, we’ll let you have him as I want him to come to my party after yours. Ed)

FIRST THING YOU’LL ABOLISH WHEN YOU RULE THE WORLD
Conservatism.

FIRST ALBUM YOU’D SAVE IF YOUR HOUSE WENT UP IN FLAMES
Davey Graham. Folk Blues and beyond.

FIRST PERSON YOU’D SEND ON A ONE-WAY TICKET TO THE HEART OF THE SUN
Thatcher or Blair. Nothing to choose between them. The crocodile or the weasel.
(Giving you a 2 for 1 ticket, as it’s you. Ed.)

FIRST THING YOU EVER PERFORMED IN PUBLIC
No idea but strong chance it was Kumbaya. Aaaargh

FIRST INSTRUMENT YOU EVER OWNED
Probably a Dolmetch wooden recorder.

FIRST PERSON YOU’D RAISE FROM THE DEAD
Lowell George
(We’ll get Peter Ustinov back as well so you can throw that party. Ed)

FIRST PLACE YOU’D VISIT IN A TIME MACHINE
Hawksbill Station!
(What, the penal colony in the Cambrian age? Featured in the novel of the same name by Robert Silverberg?!  As we say it’s the ‘first place you’d visit’ we’ll let you have this, but it’s still weird. Ed.)

FIRST TRACK ON YOUR APPLE MUSIC OR SPOTIFY MOST PLAYED LIST
Don’t stream. No way to assimilate music. Listen with intent at the highest available resolution or don’t bother. Full stop.
(So it’s Kumbaya by The Joystrings on a high end HiFi or nothing. ed)

FIRST THING YOU’D LIKE TO CHANGE ABOUT YOURSELF
Too Late!

FIRST ARTIST YOU’D BOOK TO APPEAR AT YOUR OWN UNLIMITED BUDGET FESTIVAL
Tedeshi Trucks but that could change on a daily basis.