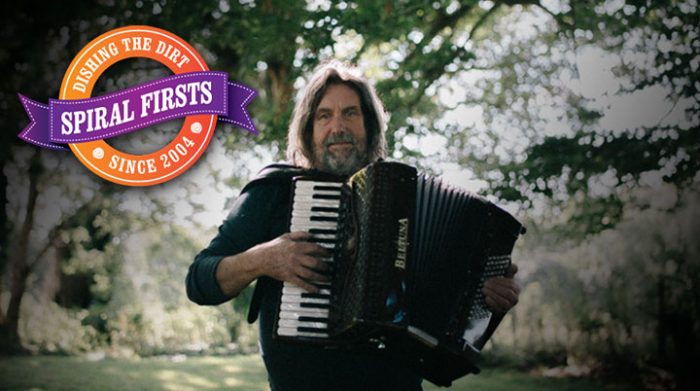 Paul Hutchinson was persuaded by his father to take up the accordion at the age of 17, the young Paul formed a ceilidh band and never looked back. His father never had the heart to tell him that it was a practical joke. Then one day in a field Paul formed Belshazzar’s feast with Paul, the Pauls went on to win public acclaim, due to them being really rather good. Paul (this one, not the other one) has also dallied with other musical combo’s, not least of which are Hoover the Dog, Karen Tweed and the Playford Liberation Front (Karen Tweed may be a person rather than a combo). His eclectic endeavours have resulted in little gems such as the Pagoda Project, and the album Clarion.

Hutchinson is a great bear of a man, topped with a mane of hair that makes us baldies quiver with fear. In his grasp an accordion looks like a concertina, yet he plays with a lightness of touch that tugs the heartstrings. This then is Hutch’s list of firsts (no idea if anyone calls him that, but I would if he let me). Here he reveals his earliest musical inspiration was Victor Borge, The Clown Prince of Denmark, truly a musicians musician…

FIRST PERSON YOU FELL IN LOVE WITH
Susan George

FIRST THING YOU THINK ABOUT IN THE MORNING
Tea

FIRST THING YOU EVER PERFORMED IN PUBLIC
Minuet by JS Bach

FIRST THING YOU’D LIKE TO CHANGE ABOUT YOURSELF
20yrs younger