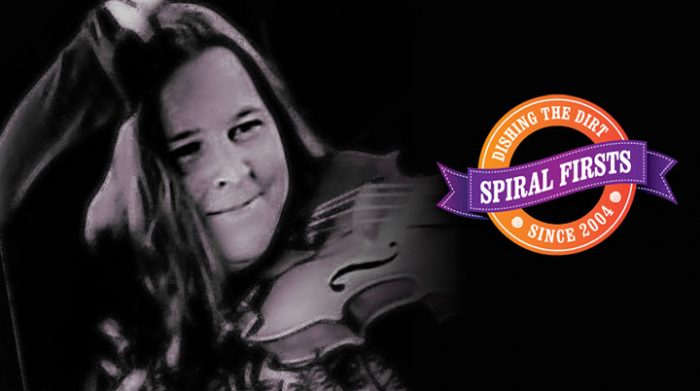 Bryony Griffith proves that English Fiddle music is no museum piece with her deft and inspiring style. Not even when she was literally a museum piece in the National Coal Mining Museum for England as a part of the EFDSS Musicians in Museums project. She is a senior lecturer in vocals and fiddle on the new Folk Music degree at Leeds College of Music. Last year Bryony released  ‘Hover’, her first solo album of purely traditional fiddle tunes. Here are Bryony’s firsts…

FIRST RECORD YOU EVER BOUGHT
Paul Young & Q Tips! With a WH Smith voucher that my Great Grandma gave me for Christmas. I wrote her a thank you letter to say what I’d bought and she wrote back saying the voucher had been intended for stationary…not Pop Music.

FIRST PERSON WHO MADE YOU WANT TO BE A MUSICIAN
I can’t really pinpoint a moment or person. My Mum taught me piano from a really young age, I was in the choir at Church and was lucky enough to get violin lessons at school. Music was always just part of everyday life, so I guess it’s down to my family. I actually wanted to be a GP or a vet until I found out you had to do Physics A level!

FIRST GIG YOU EVER SAW
We used to go to chorale stuff, rainy Sunday afternoon brass bands and Early Music concerts when I was little, but the first proper band gig I think was The Buttermountain Boys (and Embrace as well I think?!) at Greenhead college when I was about 15. Ross, Drew and Will were there and that’s when they asked me to join Bedlam.

FIRST PERSON YOU FELL IN LOVE WITH
I had a thing for Pauls. (Not those 2 folkie ones… although I have known them a very long time!) Paul Young, Paul McCartney (when he was younger) and a boy at school called Paul who would never go out with me!

FIRST PERSON YOU’D INVITE TO A PARTY
I’m too indecisive so I asked my 6-year-old son and he said either The Fisherman’s Friends or Jeremy Corbyn!

FIRST THING YOU’LL BUY WHEN YOU MAKE YOUR FIRST MILLION
A fabulous old cottage with land and a view of the Pennines, with a great big barn to host gigs, rehearsals and parties.

FIRST THING YOU’LL ABOLISH WHEN YOU RULE THE WORLD
Greed

FIRST ALBUM YOU’D SAVE IF YOUR HOUSE WENT UP IN FLAMES
I’d more likely go for the songbooks and manuscripts. A Frank Kidson and Lawrence Leadley.

FIRST PERSON YOU’D SEND ON A ONE-WAY TICKET TO THE HEART OF THE SUN
All the self-absorbed, slimy Tories who are running our country into the ground for their own selfish means. The orange one across the pond can go with them too.

FIRST THING YOU EVER PERFORMED IN PUBLIC
Away in a Manger at Old People’s Homes at Christmas with Almondbury Ladies Choir who my Mum conducts.

FIRST INSTRUMENT YOU EVER OWNED
The first thing I really remember wanting was a red plastic melodica from a jumble sale. My parents didn’t want me to have it (cos of the germs) but my Grandparents kindly bought me a new one for my birthday!

FIRST PERSON YOU’D RAISE FROM THE DEAD
Apart from lost loved ones, Jo Cox MP should not have lost her life.

FIRST TRACK ON YOUR APPLE MUSIC OR SPOTIFY MOST PLAYED LIST
I don’t really use them… I’m a bit old fashioned and prefer to buy physical albums but we did have a bit of a Spotify fest in the car on the way back from Cornwall when we’d had enough of our 6-year old’s repeated playing of his 4 Fisherman’s Friends CDs! The last track I chose was Pink Pink Sunshine by Fuzzbox

FIRST TRACK ON YOUR IMAGINARY ALBUM OF YOUR OWN GREATEST HITS
‘I Live not where I Love’ seems to be going down very well at solo gigs at the moment, but I haven’t recorded it anywhere yet.

FIRST PERSON YOU’D ASK TO JOIN YOUR ALL-STAR BAND
Well actually, my dream band is on the horizon, playing with 3 of my favourite English fiddle players, Jim Boyle, Ross Grant and Rosie Butler-Hall. Four fiddles playing fabulous English tunes. I want the audience to feel the incredible buzz you get from playing with other fiddlers! I’m also doing some duo work with the marvellous Alice Jones, which I’ve been wanting to do for a while!

FIRST THING YOU’D LIKE TO CHANGE ABOUT YOURSELF
Be less of a grump about things that don’t matter or that I can’t change.