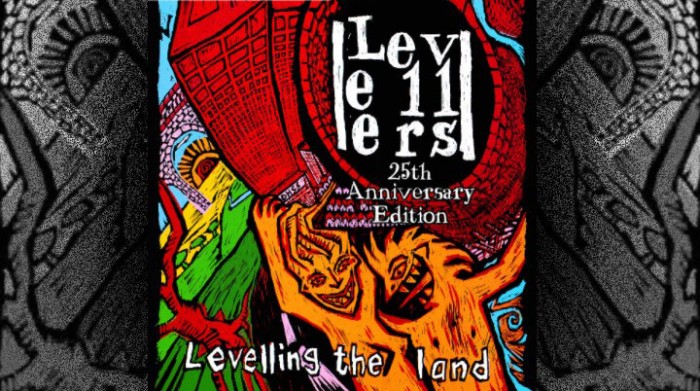 Levellers are celebrating the 25th anniversary of their seminal platinum-selling, album Levelling The Land with a three-disc special edition package, to be released on November 18.

Following the release, the band will be embarking on a UK tour on which they will play the album in full, plus a bunch of other hots from their 28 year career. Supported by Ferocious Dog and Gaz Brookfield.

Levelling The Land was the bands second album released in 1991. It captured the mood of the times with its message of proactive alienation. The UK was in recession, we had a government obsessed with savage cuts and industrial battles with the unions. Riots were sparked by defiance at the Thatcher led government and the increasingly heavy handed and ‘institutionally racist‘ police.

The songs on Levelling The Land offered another way, they summed up the counter cultural view of the world on ‘Sell Out’:

The year was 1991, it seems that freedom is dead and gone
The power of the rich is held by few
Keep the young paralyzed, educated by your lies
Keep the old ones happy with the news
Tell the singer not to song his song
Tell the poet that she’s wrong
And in the courts you’ll win the case with lies
Cos you sold them down the river-o

There was another message on that album that probably contributed, along with their use of guitar and fiddle, to being labelled ‘folk-punk’; of turning your back on the ‘city smog’ and ‘factory spill’ and looking to the country. Even if choosing ‘the life I please’ from The Boatman wasn’t possible, the dream of someplace where ‘My only law is the river breeze / That takes me to the open seas’ stirred something deep within the soul.

During that summer, Levelling The Land redefined the UK’s musical landscape providing the soundtrack for a society fed up with the twin evils of Thatcherite politics, and the post-80’s pre-grunge musical wasteland. Emerging victorious through the ups and downs of label deals, spats with the music press and the wear and tear of touring, the Levellers are still going strong after nearly 30 years in the game.

To the establishment, which included the post punk music press, the Levellers were just some grubby crusty fly-by-nights. Well, after those politicians have faded and all the music rags have folded, the Levellers have endured, still recording and touring, running their own label and their own studio as well as their own festival, ‘Beautiful Days’.

Listening to the album now you realise how much, and sadly how little, our world has changed in three decades.

Tickets for Levellers ‘Levelling The Land’ 25th Anniversary tour are on sale now with all dates and links available at www.levellers.co.uk / http://gigst.rs/Levellers.