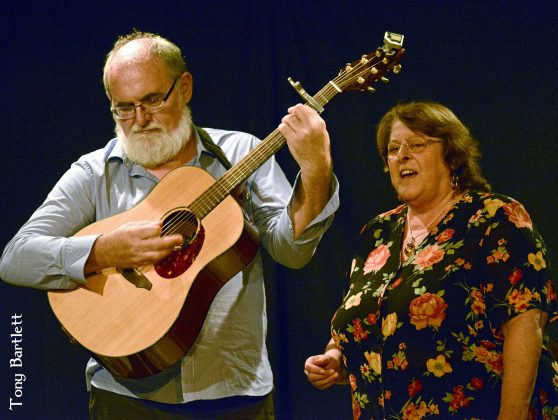 These are the celebratory numbers for this year’s folk festival in Chippenham.

We’ll start with the big number, 48. This is the number of years that there has been a folk festival associated with Chippenham. Starting way back in 1972 in Lacock it has grown to a huge celebration of Traditional folk Arts, music and dance.

What we’d like you to do is buy a ticket so you can experience the massive list of events that go on in some of the town’s halls and venues. Some 200 of them in fact. The other thing about buying a ticket means that the festival can afford to put on the free events around the town. Check out the website to see some of the things on offer.

The next numbers relate to the current organisers Bob & Gill Berry, who were asked to step in and help out in 1989. They jumped at the chance of being involved but had not realised that this was going to turn into 30 years! However they did agree again in 1996 to hold onto the ropes when the previous director, Dick Stanger, retired. Now after 25 years, they are on the verge of retiring from the job. The good news is that there are some great people looking and willing to step into their shoes to continuity of the festival for years to come.

So with this year being a bit of a celebration it is good practice for the 50th which is coming up soon.

This year has some really fine artists gracing the line-up. The Wilson Family (these were the big guys singing with Sting on his amazing album and film “The Last Ship”), Bob Fox (the current song man in the Warhorse production and young super group Grannies Attic, Award nominated performers. With another 35 acts alongside them that’s just the concert and song side of the festival. Add in over 23 bands and callers for the Folk Dances, The Committee Band, Out of Hand and Will Pound’s Relentless groups for the Ceilidhs and over 30 Morris dance sides from all over the UK there really has to be something for all. Finally, the children are not forgotten as they are the future. There is a daily programme of events including storytelling and music and dance aimed at our young future “folkies”.

Go to the festival’s website to see what we can do for you at www.chippfolk.co.uk